A request was asked of me to separate the Unicode compliant set of my fonts from the keyboard accessible parts; creating two files in one package so that people can pick/choose which Unicode typeface/font style they want to use for browsing. This is a great idea because when you have several of my fonts or Paul Morrow's fonts in your PC, the unicode sets tend to overlap each other in web browsers. And browsers are weird, I don't know how it picks & chooses the 'winner' because I've tried many different setting combinations in different browsers and resulted in different fonts being picked. I've been experimenting with settings within the font files themselves as well with no luck.

That is why I tend to keep only one font file in my "C:\WINDOWS\Fonts" folder to solve the clashing issue; I keep the other font files in my shared Adobe fonts folder - since I only use Baybayin fonts for Adobe apps like Photoshop, Illustrator, Flash, etc. Whenever I need to use a font for word processing, that's when I install the font in my windows/font folder; removing it after I already printed my document or embedded the font in .pdf file. ...quite a cumbersome system, I know, it can't work for everybody.

The problem is that it will take a lot of time & work and I am lazy bastard. But I really do love the idea and I promise that I will implement it. ...sometime in the future. :P

As I release western style baybayin fonts, I begin to wonder about how the community will receive them. 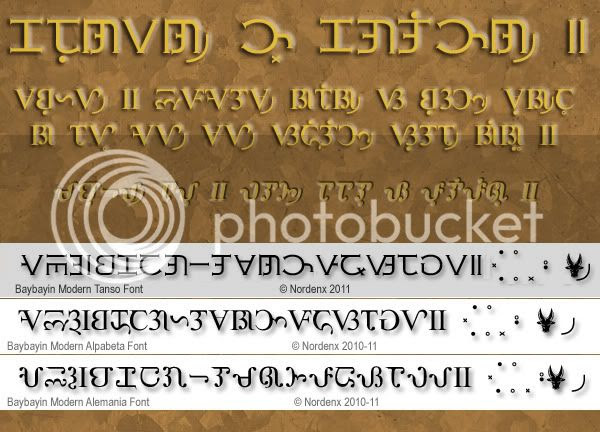 Over the years, I received numerous emails and private messages regarding my fonts and my efforts in standardizing the script for typography, uniformity of stokes, ease of legibility, ease of access, and synchronization with modern Filipino orthography. A lot of these correspondences are positive and very encouraging. However there a a few that are not. It seems that I have not made my intentions clear. People sometimes see the adjective "modern" in the name of my fonts and they immediately think "modified" which  some view with the same disdain they feel when they think that something is a product of "colonial mentality".

Ra Rah! To tell you the truth, the only glyph I consider "modified" in my fonts is my ᜍ Ra character. But even ᜍ Ra as an alternative character is basically still an embellished "traditional" ᜇ Da. Maybe that's why folks accept it; I'm just pleasantly pleased that it has been well received by many. In that light, my other "alternative" characters are designed in the same fashion; an embellished ᜐ Sa for Za, an embellished ᜁ I for E, and an embellished ᜂ U for O. 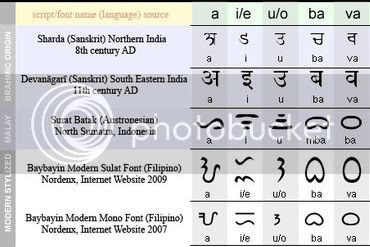 Ba Va Boom! Some folks are confused by my other characters which are actually NOT embellished versions of the another (Filipino) phoneme equivalent but are actually true (earlier recorded) representation of the same character; O Ba is the same ᜊ Ba but I assigned the round O Ba to the 'V' key because it more resembles the phoneme matching characters in related family of Indic & South East Asian scripts.

e, ang kulit o! People fail to see that even if I propose and include these alternatives, they are available to them only if they wish to use them. If you like the style of a font and want to write in the old traditional way - you can do so. It's there for you, it's free, it's easy! Just because I included the hollow ○ kudlit mark for mid vowels e and o doesn't mean you have to use them or even disregard the whole font just because you think that the solid ● kudlit mark is the proper mark (I'll get to you 'mix & dash' supporters later). Same goes to the virama and pamudpod (vowel cancellation marks), I included them because they are culturally & historically relevant. Just because they are introduced by foreigners doesn't mean that they are linguistically wrong. Virama and pamudpod marks are valid methods of vowel cancellation used by baybayin's parent Indic & relative Malay/Austronesian scripts. The virama method is very old but still very effective. Heck, it was introduced to baybayin by the Spanish scholars for the very same reason I saw it fit for use - to adapt with changing times.

Adobo at pandesal... More than 300 years of Hispanic and western influence has infused and change our culture and language. Good or bad, these influences have become uniquely and traditionally ours. The krus kudlit (cross-shaped virama) was introduced in the 16th century to adapt baybayin script to Spanish orthography, and despite the native population's adamant reluctance to use it for everyday writing, they conceded to use it when writing Spanish words. After several centuries, like adobo & pandesal, our language & culture adapted and changed, but baybayin never did. Could the early practitioner's staunch tradition and resistance to change have contributed to baybayin's disuse? The krus kudlit is as old as the introduction of the word adobo and the bread pandesal to Filipinos and while the food stuff became "traditional" Filipino fare, the cross-shaped mark became a hated symbol of Spanish oppression - a funny thing coming from a country of devout Catholics. 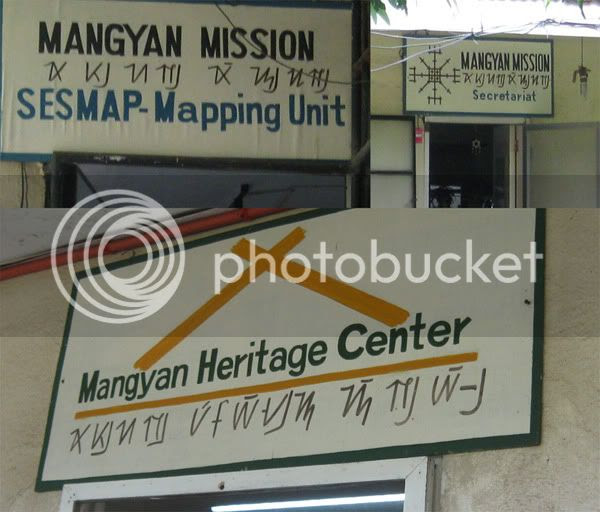 pud! galoryus pud! What's fresh and what's cooking? Being from Mindoro Island, the home of the Mangyan tribes, I have been interested with the pamudpod; their version of a virama. The pamudpod mark and a Ra character were introduced  several decades ago by Dutch anthropologist Antoon Postma, who has married into and lives among the Hanunóo, a Mangyan sub-tribe in Mindoro, Philippines. What interests me is how readily the Mangyan accepted and implimented this marks & method of canceling inherent vowels. As you can see from the photo-collage above from my visit to Mindoro last year (2010), it is now commonly used everyday by the tribes. All Mangyan books, souvenir nicknacks, shirts, handicrafts and artifacts I encountered back home bears the newly introduced mark & character. This is especially true when a Mangyan language composition is mixed with Tagalog, and foreign words. This is another reason why I included a Ra and pamudpod mark in my fonts.

I also can't stress enough that you learn both the traditional method & Spanish "reformed" method of writing baybayin and educate yourself about Filipino languages and orthography.

← And don't forget to check out the other links listed on the sidebar of this blog.

I finally finished uploading all updated Baybayin Modern Fonts this month and released several new fonts along with the it.

Included in all my fonts are alternative glyphs/characters that you can use if you prefer to.
The other alternate characters (not modified, just a different style of the same type/character):
The updates reassigned several glyphs to different keys, standardized & cleaned several character strokes, and fixed compatibility clashing issues.

Posted by Nordenx at 1:00 AM No comments: