"Festival of Philippine Arts and Culture" (FPAC) www.filamarts.org - is the largest presenter of Philippine arts and culture in Southern California presenting over 1200 artists in 9 disciplines and attracting audiences of over 25,000 people from all over the country.

When FPAC's Pacific Artists Network (PAN) opened up an opportunity for Baybayin Script artist-activists like Kristian Kabuay (baybayin.com), Ray Haguisan (malayadesigns.net), and myself ("Nordenx" baybayinfonts.com), for us to reach and teach more people in Southern California about our advocacy to preserve & propagate our ancient script, we took it.

Since then, we have been in attendance at FPAC every year.

On a side note, I met Kris back in 2010 in San Francisco at a babaylan conference (babaylan.net)  and Ray back in 2011 in San Francisco's Pistahan (pistahan.net) event. We've been together at various Filipino festival venues to promote our ancient script ever since.

This year's FPAC weekend-long event at Grand Park, Los Angeles, had one of the most active Baybayin practitioners in attendance; particularly at the PAN pavilion tent.

Despite the 100+ ℉ heat & humidity and the initial hassles of setting up, the rest of the weekend turned out to be very productive and positive. Foot traffic improved in the afternoons. We all had reasonable sales of our Baybayin themed art materials, but that is inconsequential to the amount of people who stopped by to listen & learn about our ancient script.

I am delighted that many young L.A. Fil-Ams are becoming well-versed in our script. I am also pleased that they now know to avoid Alibata and the failures of Google search results. And I am proud that they also believe in the purity & sanctity of tradition; that "modern" doesn't have to be convoluted by the western alphabet's orthography; and that they recognize the difference between stylizing, functionality, and standardization. I lost count of how many people complimented my modern baybayin typography chart and the multitude of cellphone photos of it being taken.
All in all, this was a successful venue in my humble opinion. We can't get to every visitor but collectively we reached hundreds of people and got confirmation that they are learning from what we teach; also confirming what we do matters to many.

Old RA is the New RA

I have been meaning to upload the updated Mangyan fonts with the new RA character. So here it is: DOWNLOAD (.zip file containing 3 .ttf files)

Last year the Mangyan people's leaders opted to reintroduce the older Hanunuo RA letter-form based on the LA character (with a minor modification on the rightmost up & down end strokes). They retired Antoon Postma's dash — RA that was based on the Buhid variant of Surat Mangyan. New publications from the Mangyan Heritage Center (MHC) www.mangyan.org started to include the updated character earlier this year, starting with the Surat Mangyan Primer. 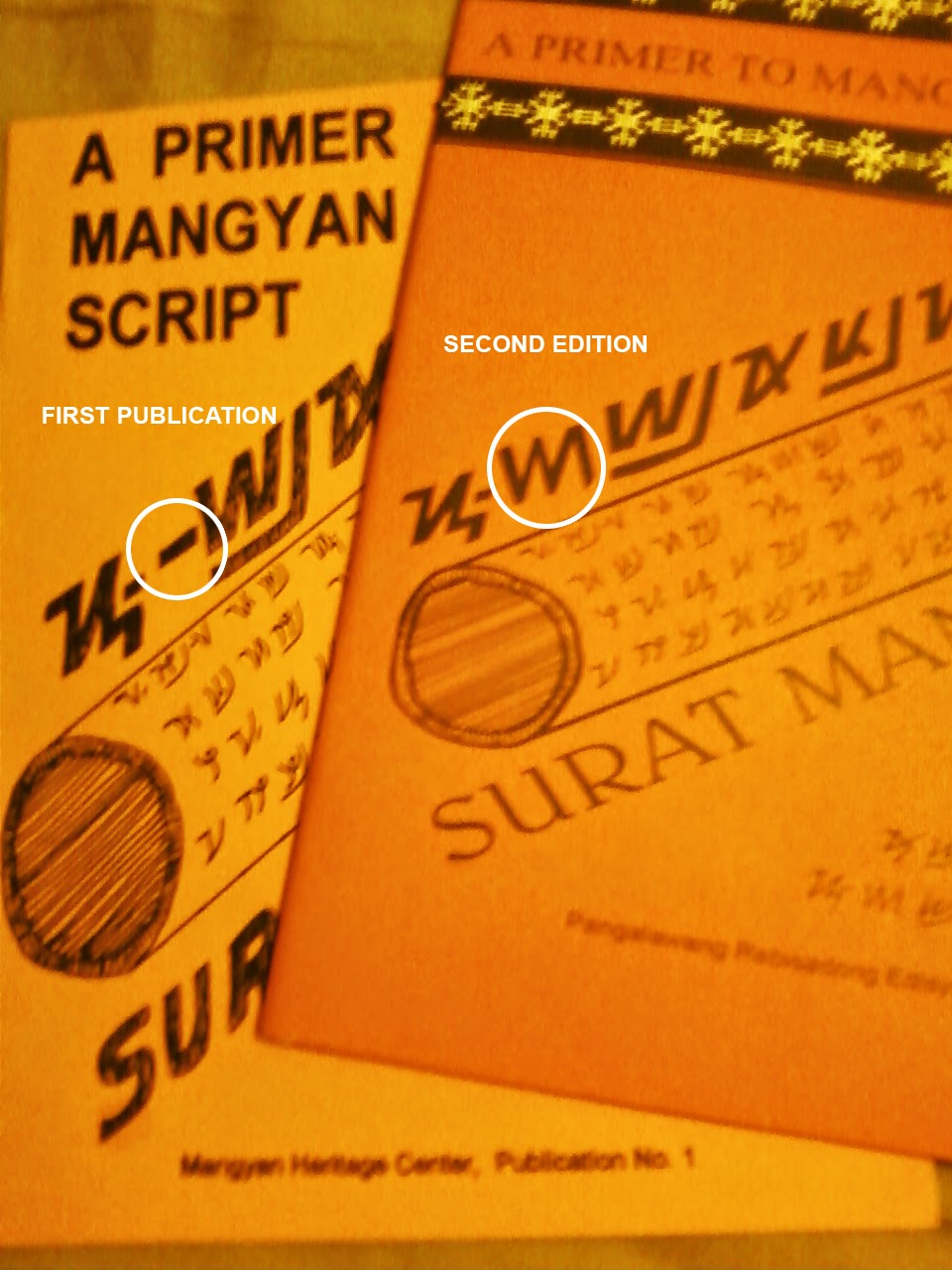 I'll update the individual .zip files in each of the font's DeviantArt download hosting later since I still need to update the keyboarding charts for them.

The Postma dash — RA and its vowel modifiers (kudlit) are still included in the fonts. Accessed by typing the Uppercase R, 7, and 8 keys. The new RA and its kudlit are now currently set to the lowercase r, (, and ) keys.

A custom keyboard layout for Mangyan script is in the works for Windows 8 and Mac OSX. I just need to optimize the Hanunuo Unicode font and finish up a Buhid font/typeface that will share some of its Unicode range with Hanunuo for similar kudlit positions. The keyboard layout will probably be ready before the end of this year.

I'm also working on a Surat Mangyan children's coloring book for the MHC.

If you're looking for another Unicode compliant font,  Google's Noto Sans have both Hanunuo and Buhid here:

Posted by Nordenx at 1:22 AM No comments: