I'm about ready to release a couple more Baybayin fonts. But before I do, I need to fix some stuff.

The Baybayin script is now a part of the Unicode standard. In the most recent version of the Unicode, it is called the Tagalog script and is given the 1700-171F range.

I realize that, when I included the text files (.rtf) to the font set package file (.zip), I neglected to change the wordings from the original draft (which I use as a template). There is a line in there that says that my fonts are Unicode Compliant; they are not at the moment. I apologize for this blunder and I aim to rectify my mistake. I am in the process of making all my fonts Unicode Compliant (since last year, my main problem was doing more than I can handle). From now on, I won't release a font until they are fully compliant and standardized.

My next release will be updates on the current five font sets I have out. The first four will be upgraded to include features from the latest font (Kufic).

Features to add:
When done, I will change Paul Morrow's trademark Katipunan Sun (keystroke @) with my Tamaraw Mark. This will be the final addition to mark the updated fonts and future fonts I will be releasing. 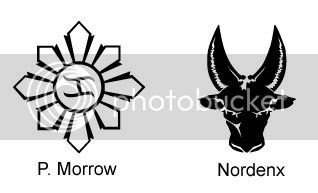 The sun was leftover from earlier days when I was just beginning to learn how to make fonts. This replacement will be symbolic of the change & transfer from historic based Morrow's Fonts into modern/artistic based Nordenx Fonts.

I also chose the Tamaraw to represent my (birthplace) home province (Mindoro) and the native Mangyan tribes that kept their script alive. Like the Tamaraw, Baybayin is endangered - but it is still alive, and it needs all our efforts to keep it alive.

Updates will be comming soon. Please, visit us again later for more details.

How to install the fonts:
The fonts are in compressed (.zip files). You will need a utility such as WinZip to uncompress them. Download a free evaluation version of WinZip or WinRar.

Each zip file contains the true type font file (.ttf) and a text file (.rtf) that contains aditional info about the font and its use & features, please read it.

You can extract (uncompress) the font file directly to your C:\WINDOWS\Fonts folder if you want or you can extract it to a temporary folder then follow the font installation instructions can be found at MyFonts.com or from Paul Morrow's Site.

I've been incorporating my Modern Baybayin Fonts into my artwork and calligraphy every chance I get. Here are some samples:

What would brand name softdrink labels look like rendered with baybayin scripts? 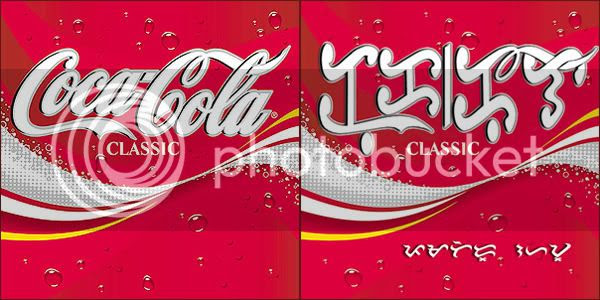 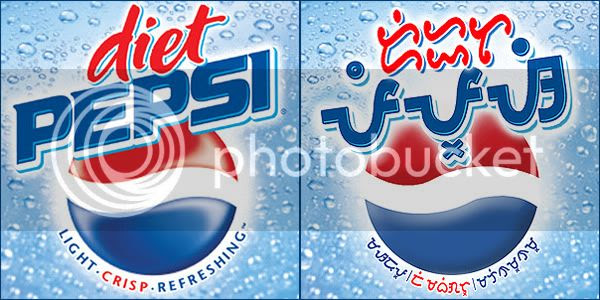 The Baybayin script on the top reads, "Maligayang bati, mula sa kabilang ibayo" (Greetings from a distant shore.) Baybayin is the ancient writing system of native Filipinos. The font is Baybayin Modern Round, found here: http://www.deviantart.com/deviation/40485871/

The tattoo is modern but it's based on original Filipino tribal styles. The shield, loincloth, sword, and spear are native designs. The background - I found that in my hard drive - I don't know where it's from so dont bug.

"Proudly Pinoy" Logo Design Competition
http://www.proudlypinoy.org/ <- a competition to design a "Proudly Pinoy" logo intended for placement on Filipino websites. The idea is to create a logo which expresses the pride of being Filipino, and which will allow a web site to elegantly declare its Philippine identity. I sent these entries:


Note the "Pa" character. Though it is kinda' hard to see, the script on the bottom reads: "Maipagmamalaki na sariling atin." (We can proudly call our own.) The script on the center of the ribbon says: "Pino(y)"

don't forget to visit this site too: http://www.kakaiba.com/ <- Baybayin Store :) 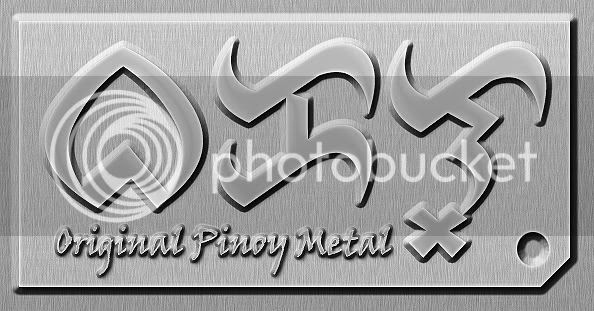 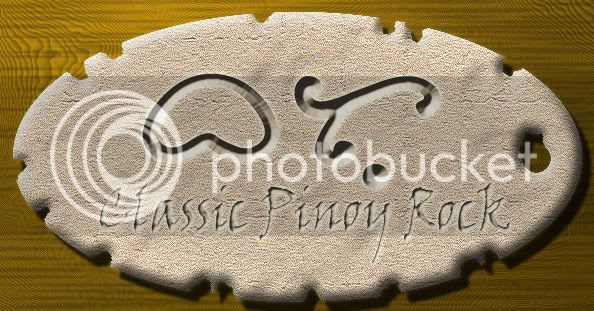 It has been half a decade since I started blogging here and this page has the most page views and according to the site's tracker, this page apparently has become the entry point where most web search lands on. So, before you continue to read the old content below, I'd like to remind you that more recent and updated info are available in the front HOME/NEWS page and all updated baybayin fonts can be accessed from the: DOWNLOAD PAGE.

The Script
The ScriptBaybayin script is an ancient form of writing by native islanders and tribes in the South East Asian archipelago we now know as the Philippines. For a comprehensive detail about Baybayin, you can find almost everything there is to know about it from this site: Paul Morrow's Site

What's New?
I just released a new font set. The .zip files containing the fonts (.ttf) and text documentation (.rtf) are available in my gallery at: http://nordenx.deviantart.com/

Kufic is the oldest calligraphic form of the various Arabic scripts and consists of a modified form of the old Nabatean script. Its name is derived from the city of Kufa (in modern-day Iraq), although it was known in Mesopotamia at least 100 years before the foundation of Kufa. At the time of the emergence of Islam, this type of script was already in use in various parts of the Arabian Peninsula. It was in this script that the first copies of the Qur'an were written.

Why make a Baybayin font in Kufic style?

Why indeed… why not?

Kufic is a very artistic style of Arabic calligraphy. Baybayin Kufic font aims to at least capture some of Kufic’s unsurpassable beauty.

Also…Another reason for creating this font is as a “tongue-in-cheek” response to many comments and misconceptions about Baybayin being of Arabic origin, particularly because of Alibata. The erroneous term "Alibata" (as opposed to Baybayin) was introduced in the early 1900s by Dean Paul Versoza of the University of Manila. He claims the term comes from "alif," "ba," and "ta," the first three letters of the Moro’s (Filipino-Muslim) arrangement of the Arabic letters.

Although Baybayin Script's most probable origins are of India's Hindu influenced Brahmic (Kavi) Script, Baybayin Modern Kufic pays homage to the rich cultural traditions of our Moro brothers and sisters.

Samples of artwork rendered by this font:

The script rendered in green outlined white baybayin kufic font reads: "Ang hindi lumingon sa pinanggalingan, ay hindi makakarating sa paroroonan." (Those who don't look back from where they came from, will never reach their destination.) A parchment with Baybayin Script in calligraphic Kufic style which reads, "Ang bayan kong Pilipinas, lupain ng ginto at bulaklak." (My homeland Philippines, land of gold and flowers.) - a passage from a popular Tagalog song "Bayan Ko" (My Country).

Other than my usual alternatives to "Ra", J, Q, and X; Baybayin Modern Kufic font offers alternative renders of certain characters. I don't want to be accused of blasphemy by purist, so I try my best to remain "traditional" and stick to tried and true forms. You won't hear me introducing new and modified characters or methods unless I have a strong legitimate and valid argument (i.e.. the character "Ra" - see previous blog entry). I just provide "alternative" styles from certain old character representations and again - if so preferred, there is the option to just use one or just the other. For example, in certain font sets like the kufic font, I provided alternative renderings of Fa ("F" and "f" keys) and Pa (there are also 2 versions of Pa switched by uppercase "P" key and lowercase "p" key) but in essence any and all of these three forms are can by used to represent Pa and/or Fa (phonetically similar in Filipino) syllable.

I've seen some people using kudlits in the shape of a dash, a half moon, a single quote or apostrophe, acute accent, grave accent, caret, etc. - but nothing beats the simple dot. In my case though, in the effort of modernizing the system - I'm trying to introduce (or at least provide an alternative) a system of differentiating or recognizing the hard vowels (i/u) from the soft vowels (e/o) by providing a hard kudlit represented by a solid dot ( ● ) and a soft kudlit represented by a hollow dot ( ○ ). Again, they are available alternatives; if you prefer to be totally traditional, you have the option to just use one or just the other throughout your compositions.

Keystrokes 2, 3, 4, 5, 6 renders special kudlit characters. Normally, it has been recorded as common practice that some writers would double up kudlits to represent repeating similar vowel syllables. For example: Bibi = bi4 ; Bibe = bi3 ; Bobo = bo5 ; Kuko = ku5 ; Also, a new addition to the syllable repeater/doubling method is a modified kudlit, introduced to Nordenx by Filipino artist Sausa ( [link] ). Use keystroke 2 to use the double syllable kudlit. For example: Baba = b2 ; Bibi = bi2 ; Bobo = bo2 . Whith these special kudlits, Baybayin Modern Kufic quickly allows these kudlit combinations: a/a (2), i/i (2), i/e, e/i, e/e (2), o/o (2), o/u, u/o, and u/u (2); but not a/e, a/i, a/o, a/u, e/o, e/u, i/o, i/u, o/e, o/i, u/e, and u/i (due to the top & bottom positions of e/i and o/u preventing a method of sequence). Also, please note that the characters rendered by the ‘, “, *, and – keystrokes are not syllabic kudlits but merely markers and behaves differently (does not position after and on top & bottom of a character).

I'd love to elaborate more about new methods I'd like to introduce. I have more concise information & explanations about my take or suggestions about new practical methods and alternatives of writing Baybayin for modern applications. So much so that I really do plan (in the process of consolidating all the info) by writing a book.

Again, you can download all my fonts at my Deviant Art gallery: http://nordenx.deviantart.com/

I hope you find some use for them in your art or future tattoos. And don't forget to visit this site too: http://www.kakaiba.com/ <- Baybayin Store Until next time...
Posted by Nordenx at 7:56 PM 6 comments: