A sample of an occurrence of vowel sign doubling in old Tagalog script. (Excerpted from a 1635 land deed, University of Santo Tomas Archives, reproduced by Villamor in 1922), provided by Christopher Ray Miller, Ph.D., 2014:
Earlier this year, we covered this in our papers and presentations at the International Workshop on Endangered Scripts of Island Southeast Asia held in the Tokyo University of Foreign Studies, Japan. 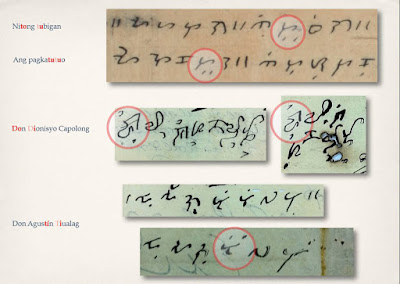 “Vowel sign doubling: Tagalog script historically shares with Buginese a spelling convention that can be called “vowel sign doubling”. This consists in marking a consonant letter with two vowel signs, either the same or two different ones, to represent two succeeding syllables beginning with the same consonant.”
~ Miller (2011-2014)

In his book on Baybayin, Jean-Paul Potet Ph.D., noted that this same convention occurs in a Bugis script inscription on an old tombstone in Brunei. The inscription shows two i-vowel diacritic marks on top of a "NA" letter/character to be read as néné, meaning "grandfather". (Potet, 2014; Noorduyn, 1993)

Since I introduced the ᜍ "RA" glyph into my fonts a few years ago, it slowly gained acceptance and has become a de facto standard for the "RA" character. Similarly, I there has been an increase of online usage and enthusiasm for Antoon Postma's "pamudpod", from Surat Mangyan, a crescent-shaped virama (for indicating a trailing vowel-less consonant) since I also include the glyph in all my fonts. So, I think that it is about time that we bring back the dual-kudlit for syllable doubling convention. I am confident that the practice will gain acceptance once again, given some time, exposure, and proper education.

There is one hitch though, we need a couple more new markers. Since the /a/ vowel sound inherent to each base baybayin character is obviously not marked, how do we repeat an /a/ ending syllable without doubling a base letter?  ...or repeated compound syllables too for that matter? We have to look into other related South East Asian abugida scripts for answers. Luckily, we didn't have to look too far. I found that the Buginese (Lontara/Bugis) ᨞ “pallawa” mark is used to separate rhythmic-intonational groups and also used to denote the doubling of a word or its root. We can borrow the same concept and style/position as the the pallawa mark.

We can actually use the pallawa mark to denote word or root doubling. It would greatly reduce reduplication of words like "halo-halo", "bola-bola", "turo-turo", "Bong-bong", "bato-bato", "sunod-sunod", etc.

Borrowing from the pallawa concept, I introduced the : colon as a “padalaw-a” mark in my Tokyo paper. The padalaw-a mark also doubles the vowel characters in the same manner prescribed in the book "Ang Wika at ang Baybaying Tagalog" by Tolentino (1937) except that the marker is on the right side instead of being on top or bottom of the ᜁ I and ᜂ U characters. The padalaw-a mark makes it possible to repeat an /a/ ending syllable without doubling a base letter.

Another extended possibility for this type of Kudlit mark is what I call a “pahantig” mark which is a single solid dot • mark on the right side of the a consonantal syllable character; it duplicates the consonant sound at the end of the marked syllable.

Before we could disseminate this, I would have to update all my fonts to include the pallawa mark. Currently only a couple of my commercial license fonts has the updated markers. The pallawa is assigned to the \ backslash key. In the mean time, we can educate baybayin practitioners about this forgotten tradition and updated solution.

Here's a recent chart to explain the dual/doubling/repeating marker system:

For a larger view of the chart above: CLICK HERE